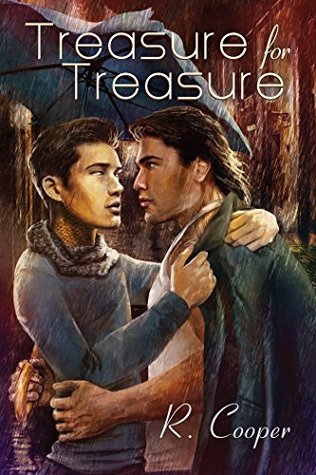 No matter the genre, I deeply enjoy a good tale.  Hence, when I find an author gifted with weaving a character that steals my heart…I become an avid fan.

In my opinion, the eternal quest for unrequited love is a very old and over romanticized story line. To create compelling books about love that awakens the reader’s imagination and emotional attention requires masterful storytelling and a wise and loving spirit.

I have written in previous reviews of R Cooper’s romances that the author has a sound and compelling understanding of the pitfalls and wonders of the human heart, its failings, successes, warmth, bravery, and love.    In my opinion, this authoring gift is underrated and is something many of us fail to achieve.

R Cooper’s work causes me to see life with an undiscovered color on the tinted lens.  This gift of sharing wisdom and entertaining the soul is something I look forward to from all authors.

“Joe frowned and then leaned down to press their foreheads together“. Yours”, he breathed, in a whisper, then made a hopeful little sound when Zarrin took his face in his hands.

“And I will give you everything“. Zarrin promised, and felt the power of the earth itself in him when Joe closed his eyes and nodded.” ~ From Treasure for Treasure

A brave a wonderful thing

Treasure for Treasure has something to bend the heart for almost everyone.  My favorite character i this read is Zarrin Xu. He is wonderful innocence, sensuality, pure heart, and bravery.  Sheltered from the commonality, he kept an image, recognized when a child as his truest treasure. He understood when he met Joe as an adult; he would have to earn his trust and love. But as in all of R Cooper’s characters, bravery must win out.

Zarrin chose to return to his hometown as a stranger and alone. He defied the dictates of his inheritance, to be the best dragon. But most of all I think the human form Zarrin choses to wear in his battle is brilliant, inconspicuous, and easily accepted amongst a mistrustful and intolerant human populace.

There was a handsome lonely hunk artist working as a barista in his hometown coffee shop. Struggling to overcome a bad relationship that tainted his reputation, Joseph Andres struggles with a racially diverse and poor background.   He feels less then worthy of true love and fidelity. But his long cherished wish suddenly appears in his serving line one morning and every morning after.  It becomes painfully clear that the new customer has desires for Joe.

Enter the beautiful shy and lonely Zarrin Xu. He is heir to a dragon clan with a rich heritage that also owns the town Everlasting where Joe lives. Unbeknownst to Joe, Zarrin has loved him all his life. With the help of an amazingly beautiful in-your-face werewolf Marie Greenleaf, Zarrin manages to discover a path to Joe’s heart.

How will a dragon make his treasure understand that he loves him? When Joe thinks he’s unworthy and Zarrin has so much wealth.

Zarrin Xu is a brave small dragon that has carried the love of his home and one man all of his life and against all odds and the will of his powerful family he returns to lay claim to both.

Joseph Andres when still a teen made a bad mistake in his choice in who to love. The intolerance of small town gossips and a broken heart made him leave Everlasting.  The determination of a young dragon helped him to discover love and the truest treasure.

R Cooper’s writings make me come back to her well of romance telling again and again. Thank you R Cooper